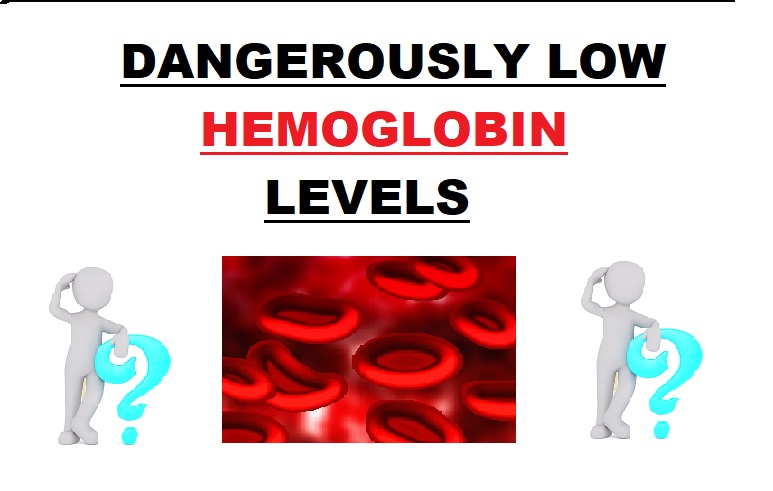 Today in this article, we are going to know the Dangerously Low Hemoglobin Levels in the human body.

Hemoglobin is a complex protein made up of four subunits. Each subunit contains a protein, or polypeptide chain, which incorporates a heme group. Each heme contains iron (Fe2 +) which can bind one molecule of oxygen. Iron gives blood its red color. After the first year of life, 95–97% of the hemoglobin molecules have two pairs of polypeptide chains named alpha and beta. This form of hemoglobin is called hemoglobin A.

Normal hemoglobin levels vary with age and sex, with women generally having lower hemoglobin values than men. Common results for males range from 13–18 g / dL. The normal range for women is 12–16 g / dL. Significant limits (panic values) for both men and women are below 10.0 g / dL or above 20.0 g / dL.

A low hemoglobin value usually indicates that the person has anemia. Various tests are done to find the cause and type of anemia. Dangerously low hemoglobin levels pose a person at risk of heart attack, heart failure, or stroke. A high hemoglobin value indicates that the body can make many red blood cells. Other tests are performed to isolate the cause of abnormal hemoglobin levels. Severely high or low levels should be called immediately to the attention of the patient’s physician.

Some causes of low hemoglobin level:

Other, less common causes of lower than normal hemoglobin levels may include any of the following:

Some people show signs of hemoglobin levels that are dangerously low. Due to low hemoglobin that can put your life at risk, they can be caused by a severe lack of blood, RBCs are destroyed very quickly, or there can be major problems in your organs.

The Journal Critical Care reports that severely low levels of hemoglobin are usually classified as below 8 g / dL or below 8.5 g / dL.